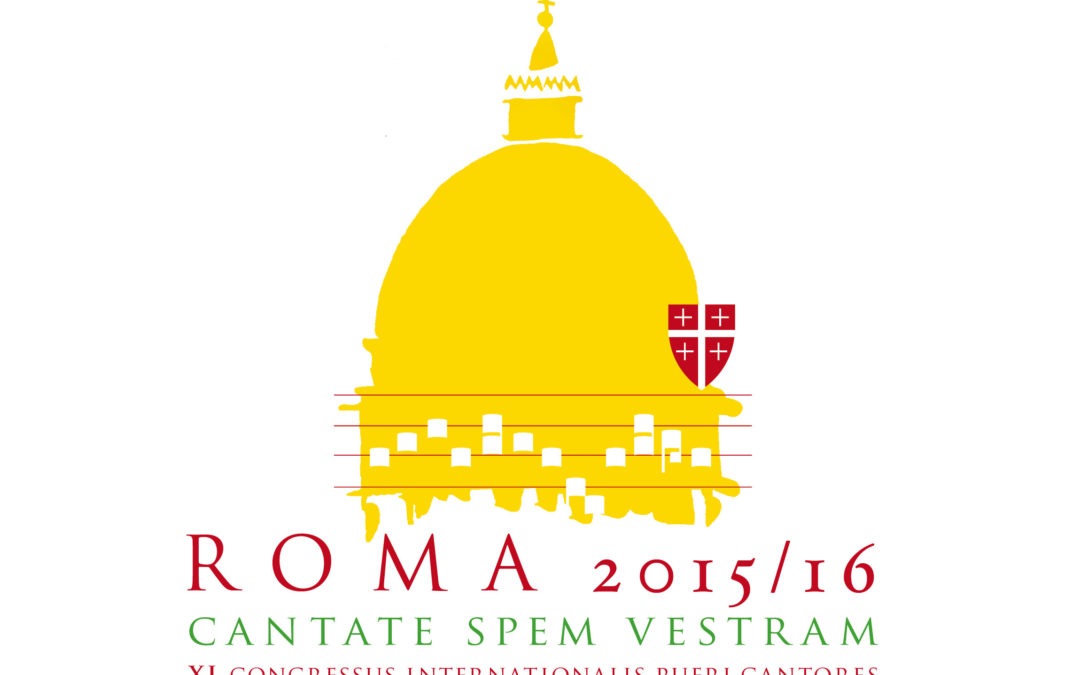 The image of St. Peter’s Basilica is in yellow and white – the colours of the Vatican. White neumes with Alleluia (of the Easter season) inscribed on the red lines, for the central period of the liturgical year actively celebrated by the Federation of Pueri Cantores is the Paschal Tide.  Moreover, His Holiness the Blessed Paul VI said to the Pueri Cantores gathered in St. Peter’s Basilica on 24 April 1964: You are for the Church as Alleluia is in liturgy: still a new joy.

The Basilica, drawn by a child’s hand, thus as if unfinished at the bottom and symbolising children and youth from around the globe,gradually transforms into neumes since when Pueri Cantores start singing there appears a beautiful harmony (like in a Gregorian chant). The neumes personify each chorister of the Pueri Cantores Federation.

The imprinted: venue and date of the Congress, as well as the slogans and names compose the further part of the Basilica. The words are written in Roman letters of Trajan’s column which is also a reference to the capital of Italy. The most distinctive slogan is the motto of the International Congress of Pueri Cantores:  CANTATE SPEM VESTRAM, which means >Sing out your hope<. The green colour emphasises the virtue of hope.

The Pueri Cantores coat-of-arms, inscribed in the contour of the Basilica, slightly extends it. It is so because the Pueri Cantores movement serves the liturgy of the Church, yet it also evangelises those outside Her. Each chorister is an emissary of beauty, peace and hope in the modern world.

The author of the logo is Rev. Seweryn Pucha?a, the priest of the Cracow Archdiocese, ordained in 2013.

The motto of the XL International Congress is the call, the encouragement directed to the Pueri Cantores. The spiritual wealth, manifested by the young singers is a true hope for the world and especially for us.

Thanks to the grace of the Holy Spirit man’s heart is endowed with the power to build a better world. Young people can show it better than adults who are burdened with various problems and whose long habits and weary agreement with status quo can suppress this desire. That is why it is imperative that the young could not only cry out, but also sing out with all their hearts the motifs of their spiritual wealth and so that they would kindle this hope in others.